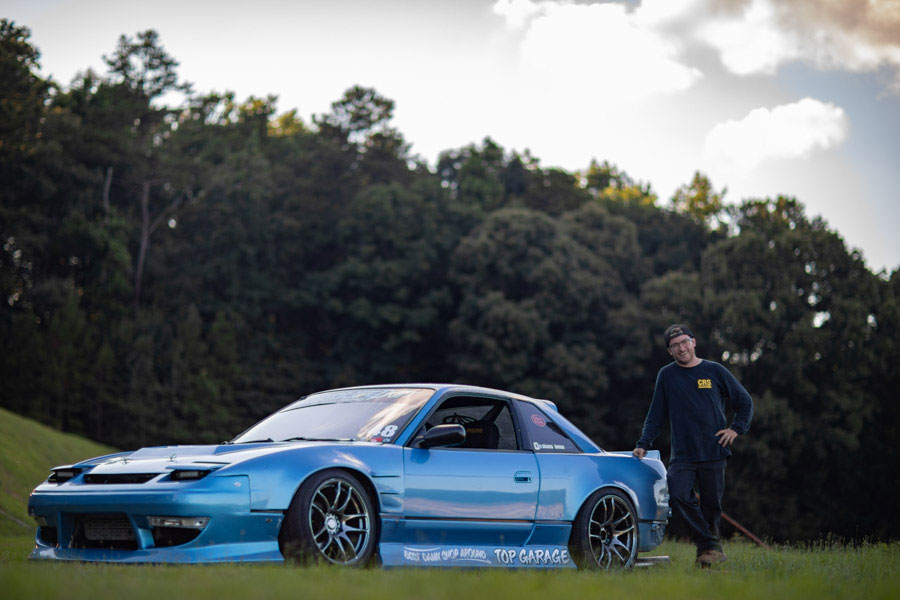 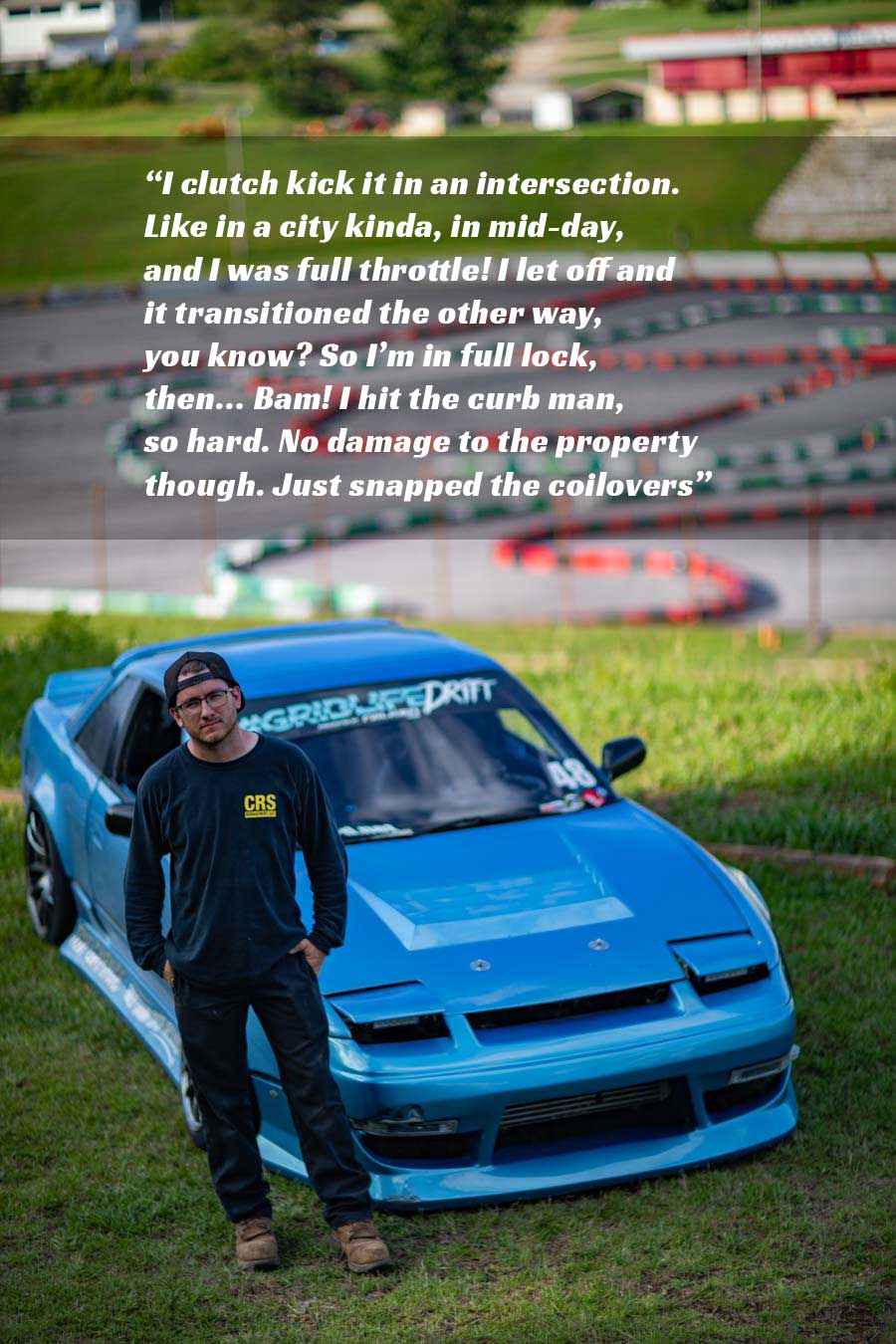 If you live in Georgia, or attend a lot of the local drifting events around the south east, you have probably seen the Top Garage drift crew. A group of about eight friends that come together quite often to burn off their tires, talk a little of bit of crap to each other, and laugh together, on top of it all they are huge crowd pleasers.

Recently, thanks to Lanier Raceplex, one of the best local drifting spots in Georgia I met up with Sloan Spivey to talk about drifting, the tracks, and the top garage crew.

When you first walk up to Sloan, you can tell he has an interesting personality. Extremely friendly, humble, and generally very, very, and I mean very, sarcastic. I originally met Sloan and Emmett Ash, another of the drivers in Top Garage, at Lanier during the “Drift and Grip” event earlier this year. From the moment I noticed a watermelon helmet popping out of the window, I knew I had to meet these guys. Sloan was wearing the helmet…

Sloan is young, but already has his own successful business called C.R.S. During his spare time, he improves his car, throws it around, fixes it, and starts again. He is a wild driver. The opening quote to this article, is actually one he gave to me about the first few times he took his blue beauty out on the road, before it became an illegal car. Sloan worked on his car for about 3 years, actually switching over to a whole new chassis after an engine exploded during his experimental stages on the build. A tough guy that kept working on his dream, even after the passing of his father hallway through the build progress. Just like the rest of us, he had issues learning how to build a car. For starters, the original roll cage was not up to spec and awful in design until Chris built him a new one. However, after he finished the build he took it out for the first time ever at Atlanta Motor Speedway for “Shift Point” and surprised himself even when he linked the entire track without ever fully drifting a car before this. 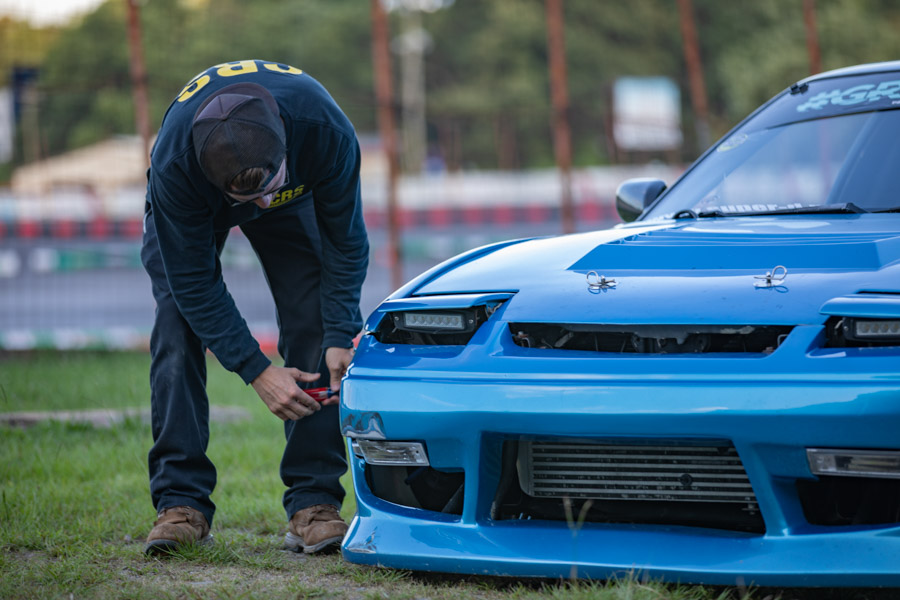 Seeing him at these local events, you know he is a crowd favorite. Sloan usually drives around with Emmett but there are 7 more drivers part of the crew, it is rare to see all of them at one time, but during events such as Gridlife South, you will usually find most of them shredding the entire track. Same will happen this year. The guys are Chris, Sloan, Emmett, Carlos 1, 2, and 3 (married to Amy), Vince, and Agustan. Agustan drives a S13 coupe, Chris an s15, Emmett an R32 beauty, Carlos 1 a green s14 v8, C2, and C3 with similar builds. I still need to meet the rest of these guys.

Chris is kind of the guy that started the Top Garage crew. Top Garage if most people didn’t already know, is a business for fabrication and custom builds. Chris runs the shop and builds most of the roll cages you see on the road for drifting, they are all to spec, and if you have not seen some of the work, you should. Chris went for pro a while back and decided it really wasn’t his thing so now, he builds on his own time, drifts on his own dime, and kills on the race line. He is really where name for these guys really comes from. All the guys met in different ways, but all car related interactions. For instance, Sloan and Agustan met on 240 Atlanta, Chris and Vince met on Forza out of all places, and the rest of the guys from odd run-ins.

Sloan and Chris met during an event called Turismo Drift in 2016 when they were pitted beside each other at the track. Sloan recalls it to be a wild experience. “You know, he has like a crew of eight guys running around doing his work and he was just chilling. So I thought this guy was big, you know? Like I’ve heard of him, and seen him, but never met him yet”. Sloan had just installed the Wisefab kit on his car, thinking it was the coolest thing ever because all of the pro drivers were running it. So, naturally he was excited to run! One of the first encounters Sloan had with Chris, was about this kit. As Chris asked him what settings he was running. “Pssshhhh, I ain’t telling you, you serious? I was laughing, and we were just shooting it back and forth, you know, but I was kinda serious about it”. Naturally the response that Chris gave him was “…Well fine man, run your bald tires straight into the wall, I don’t care, looks like you borrowed them from underneath your uncle’s trailer anyway”. That’s pretty much how they became friends.

Keep in mind, Sloan and the rest of the guys have a unique friendship. The meaner they appear, the happier they are together. So, if you hear them yelling, or saying some incredibly rude things to each other, it’s probably a good thing… Don’t call the cops just yet, wait it out, observe, learn…

Sloan has a good sense of humor, but from stories we can’t mention here, he has had some sarcastic comments that ended up in a brawl or two, just with his brother, a bodybuilder. “Yeah well… I walked up to the counter and said I’ll take two big ones…”. Referring to a couple of punches he landed himself when getting into a small argument with his brother because of his sarcasm. Once you meet Sloan, you will appreciate him a great deal because of his humor and sarcasm.

I asked Sloan if he ever sees himself going pro in the future. Surprisingly, his response was no. Just as a few other drivers I have met, Sloan really does this for the love of the community and the sport itself. “One, it’s just too expensive, a typical Friday usually costs about $80, but just to try to get a Pro Am day it’s about $300. It gets even worse when you go to Pro 2”

Sloan tried to run for pro about two years into his driving career to only find out that it’s a lot about politics and money, not really about the love for the sport. On top of that there is a lot of driving, and a lot of headache just to get track time for a day. It took the fun out of it for him.

Sloan seems excited for the future, honestly, he should be proud but remains very humble about his ability. He likes to brag about his friends mostly and talk about how grateful he is to have the people around him in his life. Realizing that some of the people that he can really rely on, are the people he met because of this passion that he gained and built on.

Sloan, Driftlinq, and I would like to thank you guys for reading and keeping up with us as we all grow.

On a special note, please check out Lanier Raceplex for their local events and gokarting program that they offer as they are one of the best facilities I have been to in a while. The karts are extremely quick, fun, and a great pastime for you and your friends to test each other.

Check out some of the pics of the guys behind the scenes drifting their gokarts around the track!