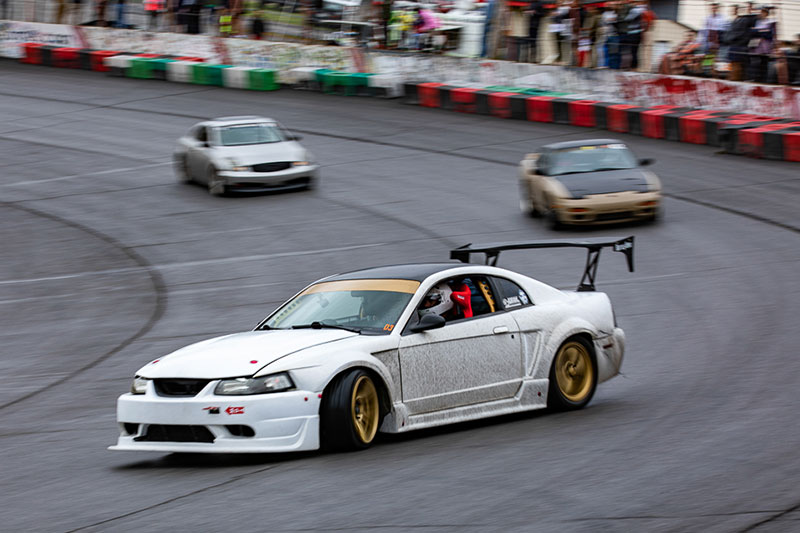 During the coronavirus outbreak, drifting still goes on! Itrack put on a full day of drifting at Lanier Raceplex. Rain or shine, the show continued forward! Amateur drivers from all over the Southeast came against all odds and toilet paper shortages to run sessions in their builds. Some cars were totally stock, several BMW’s, Miatas, and even a Lexus or two with almost no modifications came to rip up some tires. Being a rainy day, there wasn’t much smoke bellowing from the tires, however everyone was smiling and cheering as these cars flew by. Not many places in the United States still hold these types of events, if you had a bit of cash, left over tires, and a bit of fuel to spare you could have made it out and ran with these guys on Sunday. That is what makes these events so fun.

On Sunday, we got a chance to catch up with Dustin Miles and his Fitfo team again. They recently completed an awesome trip across the U.S that consisted of visiting a lot of tracks and burning a lot of tires off. Drivers from several different drifting series took a week to visit and race in some of the most known track across the United States. Drift Week started with a rush for Dustin and his teams as just two weeks before heading across the United States, he started to reassemble his car. The chassis was stripped completely, wiring had to be re-ran and a Dogbox transmission had to be mounted in, on top of all of that, he had a new paint job and a wrap put on his car before he could even start. No small feat to accomplish, especially with a full rebuild. His team did it right though, even with the rush no major issues came up on their trip. After a broken drive shaft, a run in with a pole, and a bit of damage to the rear, they made it out relatively unscathed and came out this weekend to put smiles on peoples faces for several hours of track time!

Several awesome drivers came out in the rain and they did not disappoint, some of the favorites like Nick Noback and Sherriff Dan also came out to shred some tires in the rain. Nick Noback drove his yellow BMW and Sherrif Dan of course chased these guys down in his police Mustang. Nick Noback banged out several heats with door to door action on Dan the Sherriff and Dustin Miles. Sheila Renee, dating Dustin Miles, chased these guys down hard in her Toyota as well! It is incredible to watch her and her boyfriend drive together on track as both have an equally aggressive passion for drifting!

Overall an amazing day out on track, and a great way to relax a bit amidst this panic and confusion in the world. The drifting community lives on and plays even harder knowing constant this danger is around us. We look forward to the next event and thank the team at Itrack for letting us follow of few of the drivers around and have some fun with the camera!