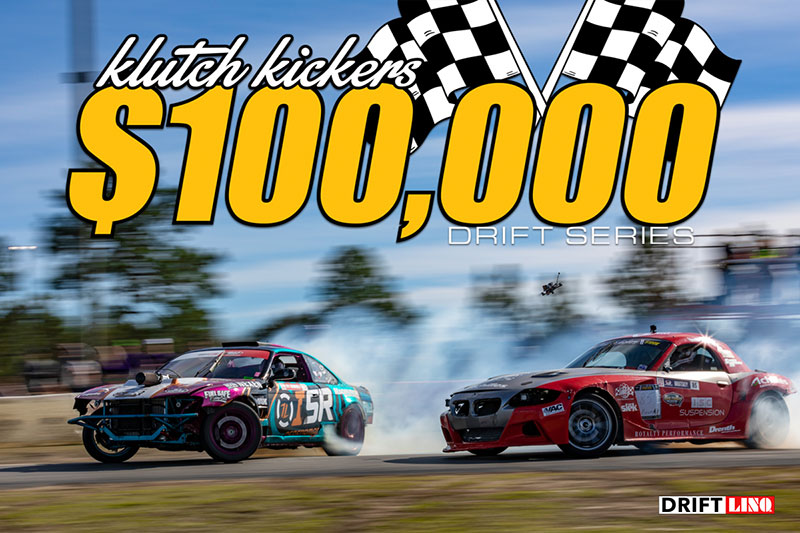 At Emerald Coast Dragway this past weekend, Klutch Kickers hosted the first round of competition for it’s $100k series. The competition was intense between all drivers, crazy battles took place in tight corners, doors were banged, and unfortunately for some cars, knuckles were smashed (poor McDowell). No matter though, the community came together and helped rebuild these damaged beasts and smoke pouring back on the track.

This event was the first big payout comp that Klutch Kickers has put on, with more then 50 cars competing in the first event of five! I think if you ask anyone that was at the track they would all agree that these dudes did an outstanding job.  All weekend long you could find smiles wherever you looked. One thing is for sure, we don’t plan on missing the next 4 events this year and believe this is only going to get bigger from this point forward.

It was amazing what some of these guys brought out and how far some of these drivers drove to get to ECD. A few drivers like Nils Guttormsen from Bristol, CT., traveled over 20 hours to get to Florida to compete. Nils (featured below) built one of my all-time favorite machines, a 1986 Dodge Ram. The truck is entirely custom built and features suspension components from an S13 and a 2JZ to power the whole thing. Having a bit of difficulty getting used to the track, he struggled at first but became a huge crowd favorite all the way up to the end where he continued to compete in top 32. Running in a close competition with Troy Manners, Nils was knocked out and had to retire for the weekend. 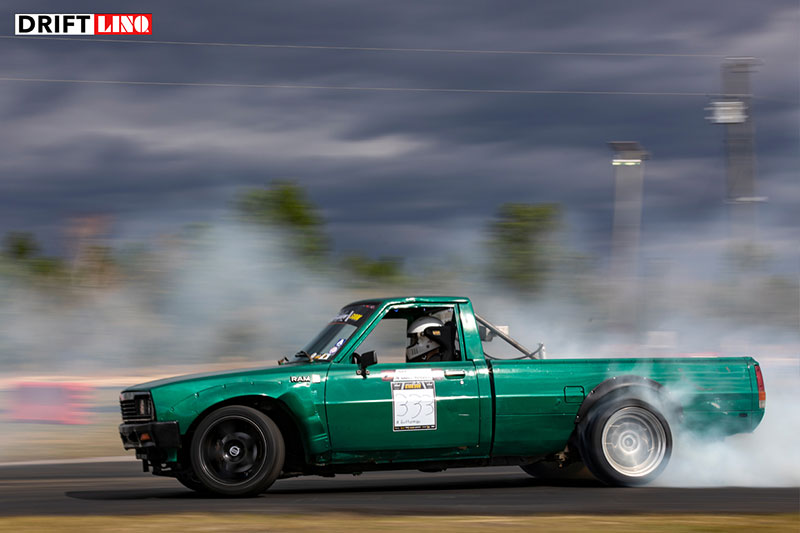 Nils is a fabricating machine, building this truck in only 5 weeks from scratch is no easy task and he accomplished it with ease. The beauty, engineering, and sophistication behind every move he made with this build is highly impressive. I asked him how he got the idea to create this monster and the story is quite simple; Working for a factory, he noticed the truck had been parked in great condition and never moved so he bargained with the manager of he plant for several months, trying to do what he could to get it.

One day, the manager asked Nils if he happened to know of anyone with an engine for a jeep, well, being the intelligent guy he is, he found one for a $100 dollar bill and traded it for the truck. The rest of the story is right in front of our eyes. The angle on this truck is crazy and its vibrant green livery is one that I truly appreciate, I think the crowd happened to agree.

Another big battle everyone was curious to see was between the 2 L.S. swapped Scions running in the top 64 group. Alex Litchliter in his 2014 raced against Ronald Ewerth in his 2013. Talking with Alex, I learned that this specific run is what he has been looking forward to this entire time knowing that the cars are almost identical, the power is very close, and the drivers ability is all that really separated from each other. Alex was a bit upset when Ronald had mechanical failure and had to retire the car. This is another driver to really watch in the next few rounds. 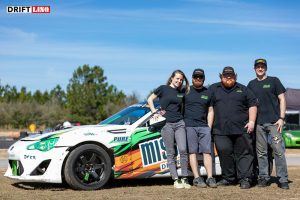 His team reminds me of a true family, close, and well managed, he continues to grow with them throughout the entire process. His car is almost completely custom as many swap kits did not yet exist. The man is a full time flight attendant, fabricator, engineer, and of course a loving family man who supports all those around him. He wants to further that mentality in the sport and maintain it. The competitiveness of this driver is surreal and we can only wish him the best of luck as he continues to kill it.

Big names like Alec Honadale, Taylor Ray, Alex Lichliter, Kevin Lawrence, Nick Castleberry, Brandon McDowell and so many more showed up to this event to have fun and run for a chance at a big prize as well. The best part of it all, the top five winners would win some sort of cash prize. First place got a full $10k (Alec Honadale), 2nd a $5k check (Taylor Ray) , 3rd a $3,500 (Dan Stuke), 4th $1k (Brian Wadman), and finally in 5th you got $500( Brandon McDowell). Seeing a Miata with an LS runs literally inches away from Alec was an incredible sight to see. The most exciting match of the day for the crowd was definitely the last run between Alec and Taylor.

Our favorite “heroic fix” award would go to “McNasty” or Brandon McDowell. Having issues with his car all weekend and snapping his custom fabricated rear knuckle, the team was able to find a welder near the area and get the car up and running just before it was to late to run in the competition. It is incredible to watch what the community can manage to do with limited time and hard to find resources. At one point the judges even called out to the crowd for anyone willing to donate rear knuckles to help him out. This is what makes the sport great, the camaraderie and willingness to help anyone in need.

Klutch Kickers has four more rounds coming up so lets see who will be winning the rest of the $100k jackpot. Only excitement and great competition to come! Thank you to the organizers and judges for having us out and letting us see the history in the making with our own eyes.

None of this would have been possible without the amazing sponsors that the series gained for this year’s events. Great supporters of drift like Grip Royal, DriftHQ, Bridge Moto, Cosmis racing wheel and a few other major sponsors set up booths and advertised their products while supporting the teams on track.

At this event, Driftlinq was also able to sit down and talk to the awesome team behind one of the leading brands of wheels and shift knobs, Grip Royal. A story so good it deserves its own feature here on Driftlinq and will be brought to you soon. So, keep up with Driftlinq and it’s partners on all the social media networks for the story to come!