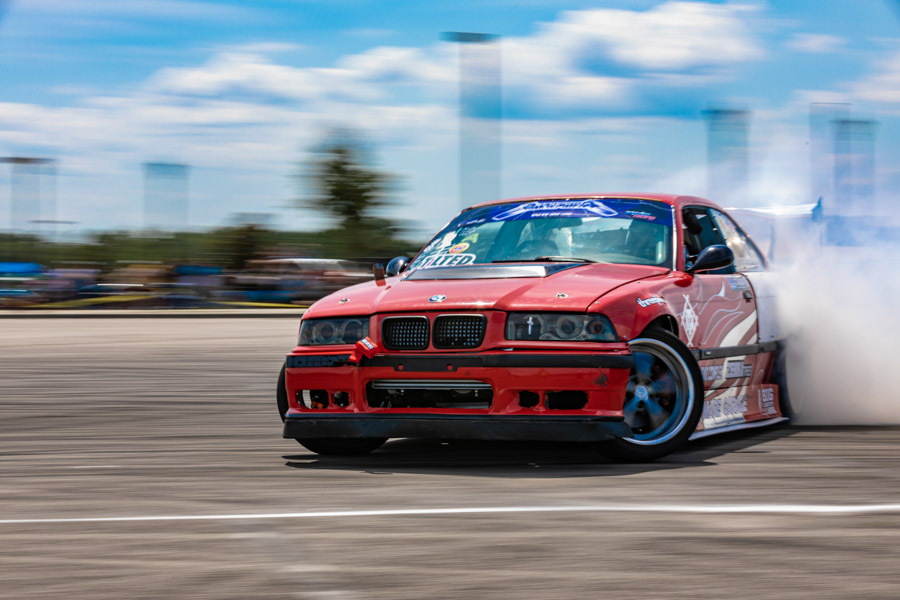 On July 27th , M.B. Drift opened its gates at the coolest venue that has ever been used to host an amateur drifting event and car show, an abandoned amusement park. The organizers of the event are drifters themselves, so they formed the schedule around giving the drivers the most seat time possible. Drifting started at 11am and didn’t end until it got dark enough to call it quits. From all of the events I have attended so far, I can honestly say, this was the most fun I had at a small event this year.

On top of the drifters ripping through the gears, local car builders brought out their trophy cars to show at the adjacent lot. A lot of culture in one spot. A mix of Ferrari classics, Lamborghini, and some more of the higher end cars filled the lot as they staged up for a competition of the builders. A lot of unique builds and people. The show also had the slammed crew, and what I recently learned about “California Clean” crews out there in the lot as well. If you have never heard of this, it is a style that truck owners have in their builds; slam the rear end down until it scrapes, get huge rims, and make sure that your wheels and entire truck are not only illuminated to match the huge bass in your rear seat, but that the truck is also loud. It’s an interesting style, but something I can respect. After all, we all have our unique styles.

The community is tight here, the South Carolina drivers hung together, ripped together, and crashed together. M.B. did have a competition for drifting with a few qualifying runs, and immediately to top 8. It was especially interesting to watch Formula Drift Pro 2 driver, Dustin Miles, race the local legend “Joe the King” or Joseph Love. Their final run was intense ending in the two drivers colliding to have Joseph finish on top.

Half way through the day, the track layout was changed to keep things interesting for the drivers and for the rest of the night the only thing that could be noticed was tire smoke, D.J’s playing their new tracks, and people everywhere in the area smiling. Even the police seemed to be enjoying themselves.

Overall, this was one of the most organized and well executed events I have been to this year. The organizers and volunteers were kind, media friendly, and extremely creative. Special thanks to Joe and Kristi for letting @Driftlinq come out and chase a couple of the cars on track in the media car. If you would like to see some video of the event check out @Trackbaronphoto_igor on Instagram!